A Case for the Suburban Office Market

Underlying Drivers of Supply and Demand 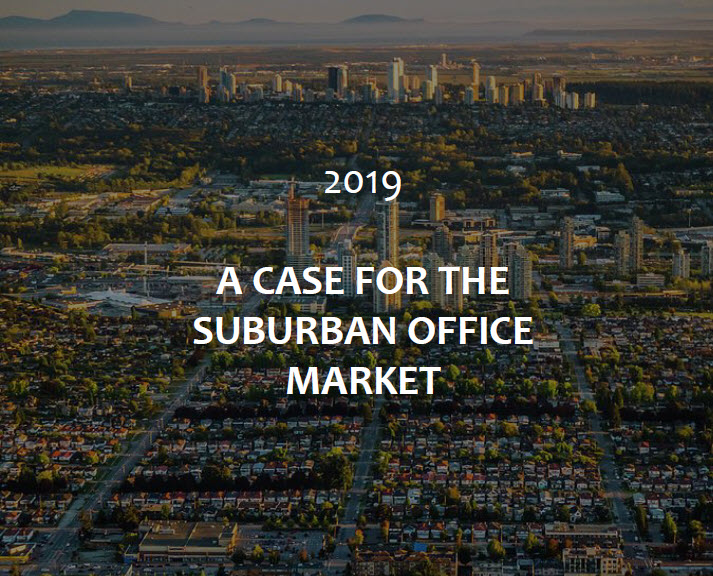 After a revised forecast, B.C. is projected to lead the nation in GDP growth throughout 2020. The approval of LNG Canada’s $40 billion natural gas export project is the catalyst for increased GDP growth of 2.4% projected throughout both 2019 and 2020. It is estimated that the construction of both the export terminal and pipeline will create 10,000 jobs for the province. With over 35% of provincial jobs being concentrated in the city of Vancouver, demand for housing and rentals in the city is set to increase. Combined with record low unemployment levels of 4.3%, B.C. is poised to experience wage growth amid the upcoming labour demand, helping to support affordability in the suburban housing and rental market. 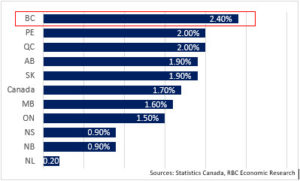 Migration remains a key driver behind the strength of the B.C. suburban real estate market. Approximately 30,000 – 60,000 net new migrants settle in B.C. each year, with international migration accounting for 79.3% of B.C.’s annual population growth. Vancouver’s population growth continues to outpace both provincial and national levels at 6.5% year-over-year compared to 4.2% and 2.2%, respectively. Ranked the worlds 6th most livable city in 2019 by Forbes, Vancouver’s livability continues to fuel both inter-provincial and international migration. The Metro Vancouver suburbs will be the only affordable option for many of the new immigrants settling in B.C. 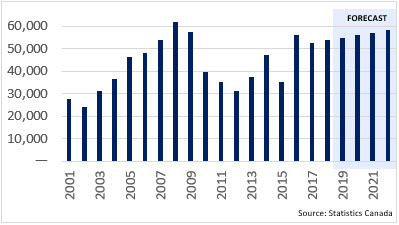 Vancouver’s robust technology sector will continue to be a significant driver of demand for the suburban office market. Vancouver’s standing as a technology hub will continue to fuel the city’s population growth through the attraction of high-skilled immigrants. As a testament to the strength of the Vancouver market, the city ranked #1 in high-tech software/services job growth out of the top 30 tech markets across North America, beating out cities such as San Francisco and Seattle for the top position.

The effects of growth in the technology sector are already being felt in the suburban office market. With limited space remaining in the downtown core, tech tenants are increasingly moving to submarkets, driving rental rate growth in those areas. Vancouver’s Broadway Corridor was ranked third in rent growth amongst 30 of North America’s top technology submarkets. The continuation of market conditions in the downtown position the suburban office market for strong future performance.

Vacancy Rates Have Never Been Lower

While developers have reacted to the high demand for downtown office space by planning new developments, approved projects are still over two years away. This next wave will deliver 3.9 million square feet of new office space to the market with over 70% of all new supply already pre-leased.

Of the total pre-leasing that has been completed to date approximately 74% is net new absorption, attesting to the high desirability of the Vancouver market. This figure includes both tenants that are new to the Vancouver market, and those that are expanding their footprint within the city. The high degree of absorption for new product, coupled with the fact that there are only three office spaces greater than 20,000 SF available in existing downtown product (two of which are under offer!) means that there is virtually zero office space available in the downtown. This lack of availability has pushed occupiers out of the supply constrained downtown and into the suburban markets.

The suburban office market has seen growing demand from tenants who are increasingly becoming priced out of the Vancouver downtown core due to limited availability and high rental rates. Overall vacancy for suburban office dropped 180 bps from a year earlier to 5.2% in Q3 2019, due to increasing demand and despite the introduction of over 827,000 SF of inventory since 2017.

Vacancy rates in Burnaby and Richmond are following the same trend as the downtown, as occupiers are forced to seek office space in suburban markets due to limited availability in the core. Burnaby’s vacancy rate fell to 7.5% in Q3 2019, the lowest rate posted in over a decade. Richmond is currently experiencing its lowest vacancy, reaching a record low of 4.9% in Q3 2019. High occupier demand coupled with limited supply is the perfect environment for aggressive rental rate growth.

The perfect storm of high demand and virtually zero supply in the downtown office market have pushed rental rates to historic highs. The average gross rental rate of all downtown office classes has grown by 46% since 2010 to a current high of $55.45 PSF.

The gross rent differential between the downtown and suburban office markets continues to grow despite improved suburban real estate fundamentals, further increasing demand for affordable suburban product. Average gross rent in the Burnaby and Richmond markets are now discounted approximately 40% – 50% from the average downtown gross rental rate. However, this differential is expected to narrow as high demand pushes vacancy rates to all-time lows in the suburban office market. Landlords will need to increase supply to combat the wave of rising rental rates for occupiers, however high replacement costs for new construction is providing minimal rent relief.

Suburban office represents great value as investors can achieve a 50% yield premium over downtown assets, resulting in attractive risk-adjusted returns as demand continues to spillover from the lack of options in the downtown core. A comparison of recent office transactions in the downtown and suburbs highlights the yield difference investors can expect when deploying capital to each respective market.

The spread between average downtown and suburban office cap rates is the widest it has been in over a decade. This provides alpha seeking investors with the opportunity to immediately realize superior returns in the face of strong real estate fundamentals currently being exhibited in the suburban market with the potential for additional returns through value-add opportunities.

** All transaction history and dollar volumes are extracted from CBRE’s internal conveyancing database.